The transition occurs at the surface of the model, which doesn’t reach the transition pressure or temperature. I guess it is because of the clapeyron slope, or am I misunderstanding it? Is there a way to set a lower pressure/temp limit so that transition doesn’t happen below this limit? Or limit with another clapeyron slope.
I want to include the eclogite phase transition, like in this phase diagram. 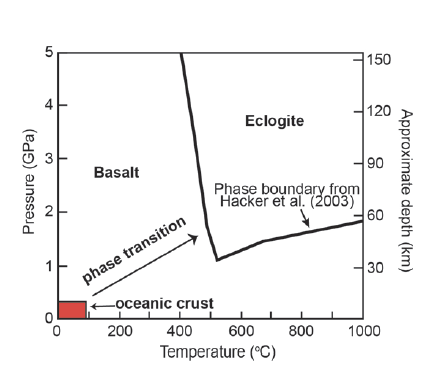 The phase transition model in ASPECT implements phase changes that are linear in P-T or z-T space under the assumption of equilibrium.

You can choose to have multiple reactions with different Clapeyron slopes, again under the assumption of equilibrium.

As far as I know, ASPECT doesn’t yet include a model including metastability, although we’ve talked about it a couple of times. The problem is certainly tractable (adding an Arrhenius model to the phase function), but would require some modification to the Latent Heat model to implement if it hasn’t been done already. @mibillen or one of the other maintainers might know more.

Thank you for your reply. I was able to set the phase transition through multiple reactions.
I am also looking forward to seeing the model including metastability in the future.