But for the case of the figure below, where there are multiple through-going faults, how would you specify the order of the faults in the list of interfaces? If set something like this, then PyLith throws an error during the creation of the cohesive cells:

If I didn’t have Fault_8 in the figure below, then this would work fine:

Similarly, if I remove Fault_3, then this also works fine:

Note that I made sure that the cohesive cells are created properly with each individual faults.

Let me know what you think about this.

Thank you in advance,
Josimar 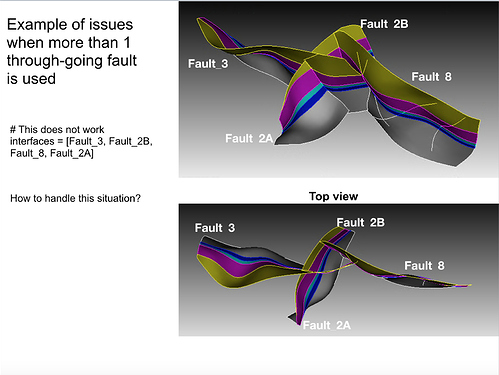 Let me summarize what I think you want:

A workaround is to make fault 2 a through-going fault and split fault 3 into 3A and 3B. Then the order would be fault 2, fault 8, fault 3A, fault 3B.