Quick question regarding how paraview presents the structured grid in paraview.
For context the images below are based on a default spherical grid with 4 levels of global refinement.
When the image is stagnant, it appears to show a structured grid though with radially thinner cells at the inner boundary of the sphere (Image 1), but when moving or rotating the image, the grid appears to become unstructured (Image 2). Is this due to how paraview is resolving the image, and is there a way to more accurately present the mesh grid in paraview (i.e. without the abrupt change in cell radial thickness at the base)? 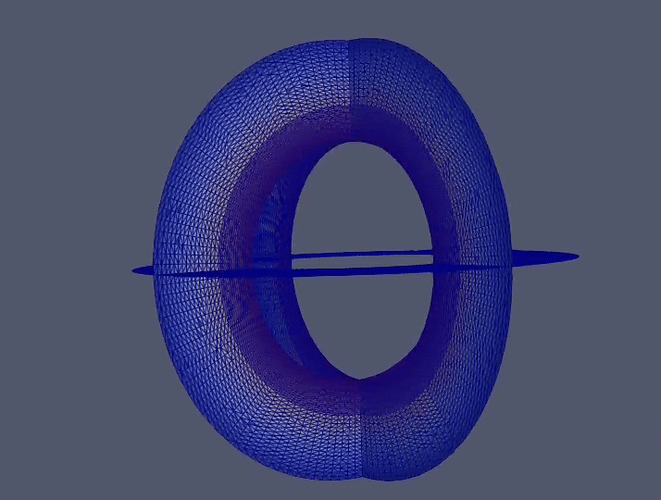 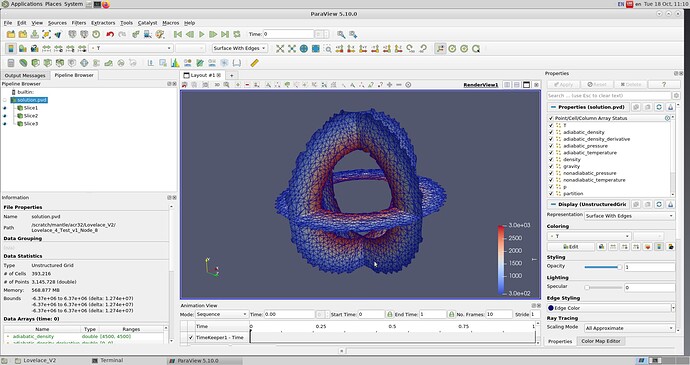 First, uncheck “triangulate slice” in the options of the slice filter to get to see the cells without the diagonals.

Second, paraview shows a rough representation while you are moving the mesh to give you interactive framerates. This will manifest itself in a messy “triangle soup” as your second picture shows. If you are about that (do you?), you can probably find an option in the paraview preferences to control when and how these previews are shown.

Finally, are you sure you are not using adaptive refinement? It sure looks that way.

Thank you for your reply and the clarification and advice.

Having turned off the “triangulate the slice” option, the “triangle soup” turned off as well. The second image was more my confusion to why this was happening, as well as making sure my understanding of how Aspect built the mesh was correct.

I can confirm that I have not used any adaptive mesh refinement at the moment. It is the default mesh with 4 global refinements. The apparent refinement only appears in 3D models (right) with the 2D models (left) not showing the radial refinement toward the bottom of the model. I assumed this was a display trick in paraview, but now I’m not sure.

I am using Aspect 2.1.0 (the version on my University’s HPC), so the meshing might have been a previous error that has since been resolved (?). 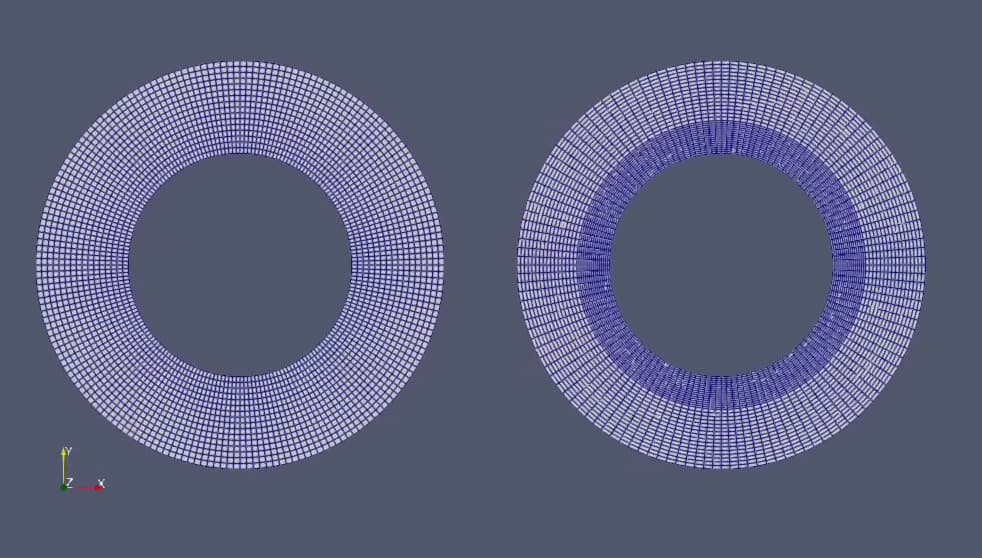 Unrelated to the question itself, that picture of the wobbly triangles must surely be one of the better ones ever made from ASPECT output. Halloween being around the corner, I think you ought to win a prize for that!

For your question about having adaptive refinements even though in the input file, your adaptive refinements are set to 0: This can still happen in several scenarios, for example (1) If your coarsening fraction is nonzero and the time steps between mesh refinement are nonzero as well and you let the model evolve over time (in this case the mesh can become coarser than the initial mesh); or (2) if you have additional conditions that change mesh refinement, such as minimum/maximum refinement functions (which ASPECT always try to enforce).

Thank you for that info, those a good thing to know for future reference.

I thought I’d run a quick test to see how the initial mesh is built and see how “far down” the apparent mesh refinement goes, and discovered it is on the initial grid where the apparent radially refinement comes in, with the middle radial refinement on 0 global refinements being at 4501km radius, rather than 4925km for equal radial length (Left model). For context the values in the model for the inner and outer points are at: inner:3480km outer:6370km. This appears to lead to the thinner elements towards the inner boundary of the model (as shown with 1 global refinement on the right). As far as I’m aware, I haven’t done anything that may have caused this, so it’s potentially an issue with my version of deal ii and how it’s built the grid.

(Also, looks like I’m continuing the Halloween theme with this model image as well 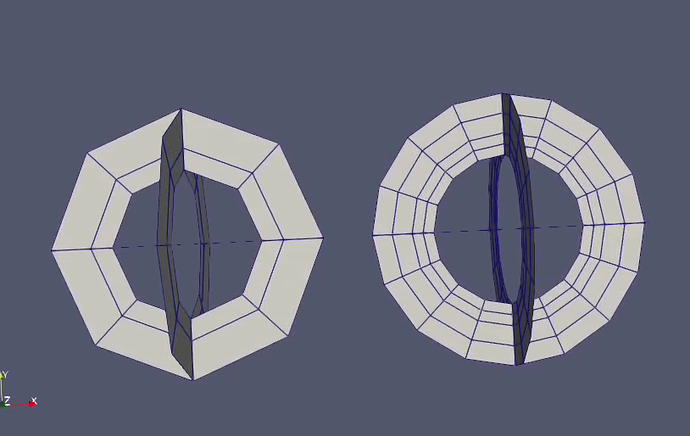 The mesh is refined in such a way that when you replace a cell by its four children, that they retain more or less the same aspect ratio of the parent cell – because this results in better numerical approximations. This leads to a smaller radial spacing close to the core-mantle boundary than close to the surface.

Thank you for explaining that, that’s good to know and I can provide an answer to that question when/if someone asks

Thank you all for your help, and going with me down this rabbit hole.