Hi Brad,
I want to know the strike and dip of vertices on fault. And I obtain the *_info.h5 file about these informations. But I can’t figure out the values, for example, there is array with 339 rows and 3 columns in the ‘/vertex_fields/strike_dir’. The 339 rows are corresponding to the number of all vertices. Do the 3 columns represent the x, y, z directions? And these values in the range of -1~1 don’t looks like angles.
Thanks.

Hi Brad，
I add three fault in my 3d model using planar fault for simplicity (the first picture). And the simulation with the single gyf fault can run to completion when I set the friction coefficient to 0 and don’t specify the buried edge. Whereas, the simulation with single klf or lmsf fault and no specified buried edge can’t run, the nonlinear residual norm can’t converaged and become larger and larger. Why does the planar fault also have the kind of problem? I try to reduce the time step and smooth the fault surfaces according to your advice, but it doesn’t work.

The nonlinear solve may fail to converge when the linear approximation is far from the nonlinear system. In your case, this might be related to the amount of curvature on the fault and using a friction coefficient of 0. If the fault is very nonplanar, then there will be lots of little gaps forming, which are deviations from the linear approximation. Using a friction value of 0 means the entire fault is slipping, which also increases the nonlinearity.

I figure the slip rate of the gyf fault along strike. Then I find the location of fault nodes changes after run the simulation (the second picture). Then, I try the simulation with specified buried edge, the node location doesn’t change. Is this the problem with the buried edge? The slip on the fault will decrease if I specify buried edge, so I don’t want to specify it. How to fix it? 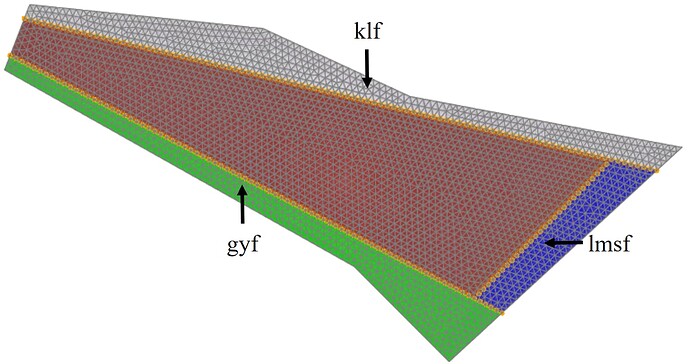 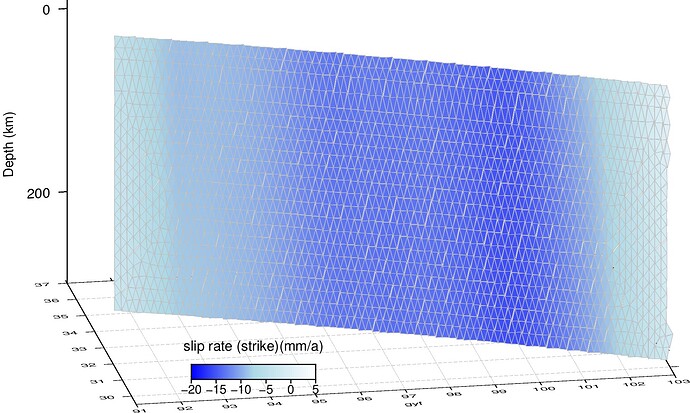 From your diagram, I am unable to determine the geometry for each fault. Do the faults klf and gyf cut through the entire domain (all edges are on the boundaries of the domain)? If so, then this is probably the source of the problem.

Hi Brad,
The klf and gyf do cut through the entire domain. and I don’t specify the buried edges in *.cfg file. The fault edges are on the the boundaries of the domain, and the nodes of faults are removed from the nodes of Dirichlet boundary conditions. I also increase the domain aera, but it doesn’t work.
Thanks

Sorry, I didn’t make myself clear. I just increase the distance between the faults and all boundaries about a lmsf length away, and extend the fault lengths to cut through the domain. It doesn’t work means that the same error occurs, namely that the nonlinear residual norm can’t converaged.

I slove my science question by referring to the Hergert and Heidbach (2010). They obtain the velocity bc from the GPS observation and use a small domain. If I increase the domain area, then physical properties of the increased area (e.g. elastic parameters ,viscosity or other faults in the increased area) between the boundaries and my focus area (near fault) may influence the slip on the fault and the modeled GPS velocity.